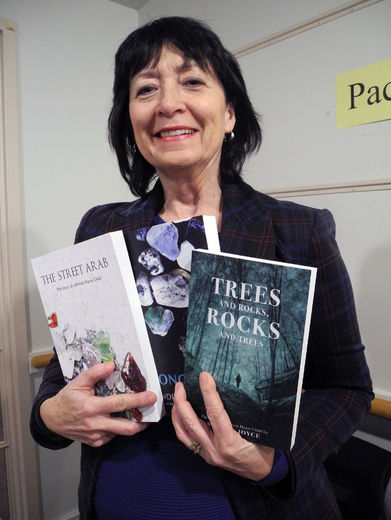 A Toronto author who has written about British Home Children – orphans brought to Canada in the late 19th and early 20th Century to work on farms – is calling for Ottawa to apologize for allowing the practice.

“An apology is important because it would lead to the reunification of families,” said Sandra Joyce, who has penned three historic-fiction books on the topic.

An official statement from the prime minister would shine a light on the story of the 100,000 children who were brought here from orphanages, said Joyce, who spoke at the Eva Brook Donly Museum on Jan. 28.

Joyce didn’t know her father was a home child until after he died. It was during a visit to Pier 21 in Halifax, the point of entry for immigrants to Canada in the 20th Century, that she discovered her dad and his brother had been sent here from an orphanage.

She and her sister did more research and discovered, and visited, long-lost cousins in Scotland while also learning more about her father’s back story.

He had been given up because his father was in the poorhouse while his mother had separated from his father and had “lost interest” in her children, according to the documents they found.

Joyce is a co-founder of an organization known as the British Home Children Group International, which is lobbying for the apology. Four proposed bills have been tabled in the House of Commons but nothing has passed so far, she said.

Life for home children was a mixed bag of experiences, Joyce said. Some were treated well and were made part of the families they lived with. Others had “horrific” experiences.

“The large majority,” she said, “were in the middle, like my dad. My dad was not seen as a child. He was seen as a worker.

Joyce said her research explained a lot about her father. He didn’t like Scotland, and she could never figure out why.

If the issue of home children had been made public and taught in schools, “may be he would not have been such a reclusive person,” she said. “He was so distant. Maybe we would have had a better relationship. I always felt something was missing, maybe I did something wrong.”

Joyce has researched in detail how the system of home children worked. They were taken to “receiving” and “distribution homes” in Canada before being sent to farms. Her father went to one in Brockville. (One was located in the northwest corner of Norfolk County, said Mary Caughill, chair of the Norfolk Heritage Committee).

“You could order them and could return them if they were not suitable,” said Joyce. “They were kind of like products they could buy and sell.”

Home children are an important part of Canadian history, she said. About 3.5 million Canadians are descended from them or about 10 per cent of the population, she noted.