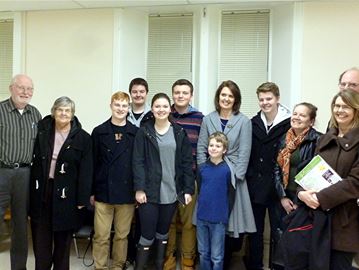 Neil and Margo McVittie of Georgetown, with children and grandchildren. Neil McVittie’s father, John, was a British Home Child.

One in 12 Canadians is descended from orphaned or abandoned British Home Children who were sent here between 1869 and 1939 for farm and domestic service.

The Esquesing Historical Society brought this issue to light by hosting author Sandra Joyce at its April 13 meeting. Joyce’s book, The Street Arab, is a fictionalized story about her father who was a home child from Scotland.

Like many home children, Joyce’s father, Robert, never talked much about his childhood, and it wasn’t until after his death, during the author’s chance visit to Pier 21 in Halifax, that she discovered her father’s name on a ship’s passenger list.

Further research revealed that at age 15, Robert Joyce and his 12-year-old brother, were among the 100,000 boys and girls sent to Canada from the U.K. during the mid-19th to mid-20th centuries to provide much needed farm and domestic labour, and thereby relieving the U.K. of overcrowded orphanages.

Street Arab was one of the names given derisively to these children, who were considered socially undesirable, bad blood, or street urchins. Because of this prejudice, they were often mistreated and abused, and usually not allowed to eat with the farm family, or even speak to the children.

Ontario’s Premier Arthur Sturgis Hardy said at the time that he was concerned about “the moral or physical deterioration of our people,” due to the influence of the home children.

Boys and girls from six months old to 18 years were sent to isolated farms across the country as indentured servants to work from about age 10. Siblings were never placed together.

Some children were accepted into caring homes and considered part of the family, but the majority were treated as untrustworthy help.

There was very little supervision over the living conditions of home children, and no accountability for the way they were treated.

Among other home children descendants at the EHS meeting were three generations of Neil and Margo McVittie’s  family. Neil told a moving story about his father, John McVittie, who was sent to Canada with his twin brother, Joe.

John and Joe were placed on different farms, so every Sunday – their only day off – the two brothers managed to meet and walk eight miles to church together.

When they arrived in Canada, their ages were recorded as 14 years, but four years later, when Joe died from a farm accident, his birth records revealed that he was 14 at the time of his death, so the two boys were only 10 years old when they were put to work on the farms.

Often underfed, McVittie said that home children would look for food wherever they could, even asking road workers for their apple cores.

“They looked out for one another,” he said, “ after they were out on their own, if another home child was out of work, my father would support them.” These bonds would last forever.

McVittie’s father, John, established himself as a tobacco farming expert, then as a fruit farmer. Neil also created a successful career in agricultural science.

Over 55 childcare organizations were involved in the emigration of British home children to Canada. Anyone who wanted to take in a child, had to pay an application fee – whether or not a child was placed with them. So, says Joyce, a lot of money was made in this scheme.

A lot of the children were not actually orphans. Single parents without the means to care for their children would be forced to take them to an orphanage if only temporarily. Sometimes, when parents went back to get their children, they’d be told that they were gone.

These parents would not have the means to find their children again. Often, when boys came of age, they enlisted in the military, hoping for a way to get back home.

Home children of working age were supposed to be paid for their work at the completion of their indenture at age 18. But most home children never saw that money.

Australia, New Zealand and Rhodesia also took in home children, says Joyce, but by far, the majority were sent to Canada.

Australia has apologized for their treatment of the home children who were sent there with the promise of ‘oranges and sunshine’. Britain has also apologized, but no apology from Canada. There is a petition on Facebook.

It is also tabled in parliament, for the fifth time.

“It’s time for British home children to be recognized in Canada,” said Joyce. “They are an important part of our history, and made a significant contribution to our culture.”